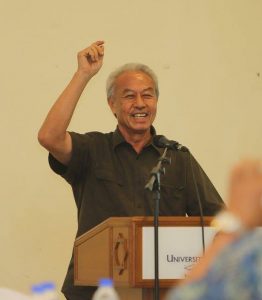 Prof. Emeritus Dato’ Dr. Hood Mohd. Salleh is a well-known international figure, especially in the area of anthropology and sociology. He was born on 24 November 1942, Negeri Sembilan, Malaysia. He holds a Ph.D, Bachelor of Letters and an Advanced Diploma, all from the University of Oxford, England. His first degree, in anthropology and history, was obtained from the University of Western Australia in 1970.

He began his career as a tutor in the Anthropology and Sociology (1970-1972); lecturer in the same area (1973-1979); an Associate Professor (1980-1992); and was elevated to a full Professor in Social Anthropology in 1993. He also led successfully the Institute for Environment and Development (LESTARI) of the National University of Malaysia in 1994-1997 and also acted as the Professor/Main Fellow of the institute in 2001-2013. He was appointed as a Foundation Professor for Malay Studies at the Victoria University of Wellington, New Zealand. At present, he continues to contribute his expertise in the Mizan Research Centre, USIM as an advisor.

An astute researcher in anthropology and sociology, he has published numerous publications and spoke at many conferences and seminars with national and international significance. In recognition of his immense contribution, he has received awards and accolades, among others, the Emeritus Professor of the National University of Malaysia in 2008, and Distinguished International Alumnus, The University of Western Australia in 2011.

He was also an athlete who represented Malaysia for 7 years playing squash and is still active playing golf and other games.